Achieving the Dream.
Luck? Good fortune? Whatever – it was most welcome!

It took me a little over sixty years, but I finally made it. I escaped ‘the smoke’ and found myself living in Paradise. 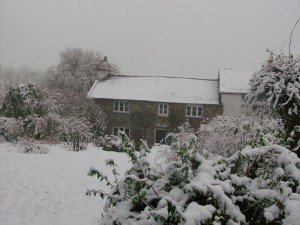 Well maybe not quite Paradise – Devon to be precise, although there is an old saying here in the County:

From when I was a little girl living in a busy town did not feel right, I longed for open spaces, for trees, grass – that heady scent of pure air. Instead, I had a North-East London suburb as home. Yes, it was on the very outer edge of London, bordering the several hundred acres of Epping Forest, but we lived in a semi-detached house in a road with other semi-detached very similar houses (forty-eight of them in fact), with Number 1 at the top of the hill, and 48 down the bottom. We were number 5. Third one down on the left.

I clearly remember as a little girl (I think I was about four) standing at the top of the hill crying bitterly in the hot summer sun. Why? I was very short sighted, most of everything was a blur (Mum only discovered that I couldn’t see when I went to school a year later. You would have thought that the fact that I was constantly falling over, or dropping things, or bumping into doors would have alerted her to something wrong. Oh well…) I could see down the hill a large blue area bordered by something whitish-brown. I thought it was the sea and a beach. I had no concept, then, of reservoirs being low because of weeks of drought. To me, it was the sea, and I was heartbroken that we had lived there a long while (to be fair it could have been only a couple of days) and we had not been down to the seaside.

I remember it clearly because I was disappointed to discover that we did not live near the sea after all.

To make up for living in town I enjoyed horse riding in Epping Forest. I started when I was four because I got packed off down to the stables with my sister who was (is!) six years older than me. I must have been a pain in the backside to her.

I guess riding was OK if you couldn’t see. After all, the horse could. I remember falling off for the first time. The horse stopped, down went its head to eat grass and I slid down its neck to land in a heap on the grass. 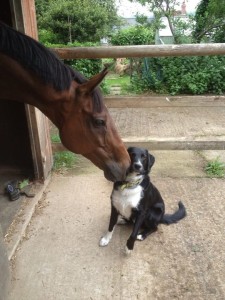 Holidays were my salvation, especially when I started work as an assistant in a library and became independent of Parents’ Choice Venues. I went to Dorset occasionally, or more often, the Lake District. Real ‘Swallows and Amazons’-type holidays. Complete with boats.

The elation when I got there. The sound of rooks and chaffinches. The intoxicating air. Houses built of stone, none of them the same, most of them old. Cows, sheep. Bliss.
The despair coming home. Coming off the motorway and looking out over the gloomy sprawl of London. Was it any wonder I suffered from bouts of depression? Even as far as the verge of suicide for a short while?

I grew up, got married, had a daughter – who also rode from a very early age and apparently loved the open spaces and countryside as much as I. We had our own horses and ponies, we rode together in the Forest. Life was goodish, despite being so near a town But it could have been better had the dreams come true.

Why didn’t we move? We couldn’t. Our house was rented, my husband had a low-paid job. Some weeks it was a struggle to get by. But we managed it. Ron retired, we moved to a slightly better house because the flat above us caught fire, and their bedroom ended up on my daughter’s bed. (fortunately she was not in it!) Our landlord was obliged to rehome us.

We only went round the corner, but we were opposite a school with trees and a playing field. And we were the last house in a very short road. Number 32. Except there were only 16 houses. All the odd numbers had been destroyed in the war and they built the school there instead of rebuilding the houses.

Not exactly peaceful – we were only a few hundred yards from the A406 London North Circular Road. Above, the stacking area for planes waiting to land at Stanstead Airport. It was a nice house. But it wasn’t the countryside.

And then luck, fortune, karma, whatever, visited. Big Time.

2012. The opening night of the London Olympics. The National Lottery had a special raffle for one-hundred winners. Little did we know that evening as my husband and I watched the opening ceremony on TV (and heard the fireworks from the stadium not far away,) that the next day would change our lives. We were one of the one-hundred £1,000,000 winners.

Winning was surreal. Most of our good friends were delighted for us. A few pretended they were. A couple immediately asked for money. (funnily enough, they are no longer friends!) At one point I wished we hadn’t won the money. Financial advisers, bank managers, legal advisors. They all like pouring cold water over everything and peeing on your parade.

“Live in the country? You’ll soon realise you’ve made a mistake.” – er, why would we make a mistake?

“Stables? You’ll soon find your daughter will become fed up with horses.” She’s had horses for almost thirty years. Why change now?

“Move away from friends?” I haven’t many friends in London.

“Move away from family?” They can always visit.

I got sick of it. All the nonsense advice from people who didn’t want us to spend the money, but to invest it. All I wanted, all I had ever wanted, was to live in an old farmhouse in the country. I wanted to wake up hearing the birds. To look out of my bedroom window at the sky and fields and trees. To wander up a lane with a dog. To have our own stables for our own horses.

We looked at various places in various locations. Nothing suited. Then I said, “What about Devon?”

I applied to a TV show that helped people house-hunt. “Please,” I said, “help us escape from London!”

My daughter and I were whisked away to Devon, courtesy the BBC (husband stayed behind to look after the pets). The first house they showed us was The One. An eighteenth century farm house, with thirteen acres of land. Stables, a stream, a waterfall, some woodland, and on the edge of a quiet, peaceful, village that had no street lighting, and about eighty-odd houses. 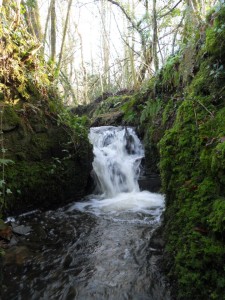 We bought the house. Moved in on a mid-January day when it started snowing. Most of the money has gone – we invested a little, but most of it has been spent on the house and happiness, which included building a self-contained extension for my daughter and her new husband. They had known each other a long time but had parted company. Sh*t happened to both of them in-between, they met up again a few weeks before we were due to move. He, however, was not going to lose my daughter again. He followed us to Devon, found a good job, proposed, and they were married almost a year ago today as I write this (February 22nd 2015)

It is pouring with rain outside. Who cares? I hear the owls at night, the mournful cry of the buzzards by day. The horses – including two purebred Exmoor Ponies who were born wild on the moors – live at the end of the garden. We have Baz, a rescue dog from the local dog’s home. Two cats, eight chickens, five ducks and a delinquent goose. 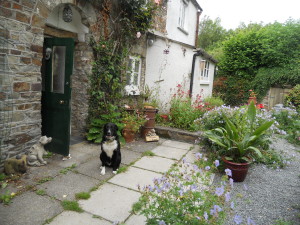 It has taken a little over sixty years to find contentment. It was worth the wait.

ETA from Helen: There is an addendum – we now have two dogs, Tess came to us from the rescue centre five days ago, and UK TV viewers might like to know that until the end of March 2015 there is a chance to see an iplayer repeat of the TV show where we found our home: http://www.bbc.co.uk/iplayer/episode/b021qww0/escape-to-the-country-series-13-75-devon