In The Case Of Big Life Decisions, Always Follow your Heart… 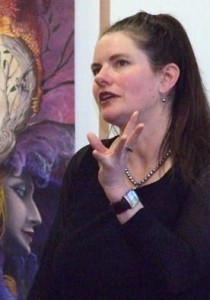 When Gillian invited me to post as part of Women’s History Month, her brief included the advice that all her guests would be writers and she wanted us to celebrate staying the course, focusing on either a part of our own lives or another woman’s. She did not specifically ask us to talk about writing but I thought, on first reading the email – and still think now – that there can be few careers or life decisions that test one’s ability to stay the course as surely as writing. So I decided that the slice of personal her-story that I will talk about today is my decision to pursue a writing career – which brings me immediately to the opening quote:
“In the case of big life decisions, always follow your heart…”

My acquaintance with the quote comes from a series of paintings by a friend, Julia Hearnden, in which “our heroine” may be seen pursuing her errant heart. Humour aside, there is no shortage of life coach-style sites exhorting us to follow our hearts, while also assuring us that once we commit fully everything will magically fall into place and all obstacles, by implication, equally magically dissolve away. Yet although deciding to write fulltime was undoubtedly a case of following my (undoubtedly errant!) heart, my experience since making it has been that although I would have loved for everything – not just finding an agent and publishers, but writing the books themselves – to magically fall into place, my journey thus far (eleven years) has been far more one of staying the course against the odds.

In pausing to consider these odds, I shall leave aside the vital step of actually completing publishable work, because I had already passed that milestone when I decided to transition into a writing career. But I was still stepping out into what was uncharted territory for me – and the maps supplied by others who had gone before (supplemented by the prognostications of innumerable pundits) were hardly encouraging. In short, no business case in the world would support becoming a writer, given the chances of finding economically viable success are always uncertain – and equally slight whether in the traditional or self-publishing realms. And regardless of which of the publishing routes now available one decides to pursue, there has never been any guarantee at all of finding readers, let alone readers who are prepared to pay for your work.

The only way I have stayed the course thus far, was by embarking on the journey with the clear understanding that I write to fulfil an artistic imperative and not an economic one – and subsequently cutting the cloth of my life to accommodate that reality. Because life, as Hippocrates so rightly pointed out, is short but the art long and trying to squeeze it into the sidelines of a regular career path just wasn’t working for me. Yet the course must still be stayed, because quite aside from tough economic realities, a writing life is no bed of roses in other ways: rejection of one’s work is commonplace, criticism comes at least as frequently as praise, and the commercial realities of contracts and bottom lines – because publishing and bookselling are very much businesses still – are constantly at odds with the artistic imperative.

The only thing that has gotten me this far is that core understanding of why I am putting myself through this particular mill, which is for the love of story and actualizing the creative drive to both tell my own tales and get them out into the world. That is my business. Everything else – everything – is up to the world and I have no control over it whatsoever.

So in the case of big life decisions I would never argue against following one’s heart. But since the path of true love is often star-crossed and cannot be relied upon to run smoothly, I would also counsel retaining a cool head and investing in robust footwear, a compass (since both maps and GPS oft prove fickle in the writing realm), and a butterfly net (the better to catch the heart one is following.) It is only by heeding similar sage counsel myself that I have managed to stay the writing course – so far.

Helen Lowe, is a novelist, poet, interviewer and blogger whose work has been published, broadcast and anthologized internationally. Her first novel, Thornspell, was published to critical praise in 2008, and her second, The Heir of Night (The Wall Of Night Series, Book One) won the Gemmell Morningstar Award 2012. The sequel, The Gathering Of The Lost, was shortlisted for the Gemmell Legend Award in 2013. Helen posts regularly on her Helen Lowe on Anything, Really blog, once a month on the Supernatural Underground, and occasionally on SF Signal. She is also active on Twitter: @helenl0we. The Heir of Night is published in the USA, UK, Australia, New Zealand, France and The Netherlands and available through both bookstores and online outlets; Thornspell is similarly available in the USA and New Zealand.