On printed books and manuscripts

On Listening and Writing

WILL SHAKESPEARE: Please, call me Will.

CRAIG: Uh – certainly. Can I begin by asking you about your influences.

WILL SHAKESPEARE: Influences? What are you talking about? I don’t have influences. I influence others!

CRAIG: Yes, but you may be aware of some accusations of copyright breaches in your work.

WILL SHAKESPEARE: Are you asking about a new fashion in pants?

CRAIG: No. Breaches. As in once more unto the breach dear friends. The accusations are that you have actually copied most of your stories and characters.

CRAIG: Interesting response. So moving on, I wanted to get your opinion on my new book, The Floating City, as it uses the original Italian stories that you adapted into three of your plays. They are Luigi da Porto’s Giulietta e Romeo of 1530, Ser Giovanni’s Il Pecorone (the Dunce) of 1558 – that you used for the Merchant of Venice.and Giraldi Cinthio’s Hecatommithi of 1565, that you used for Othello.

WILL SHAKESPEARE: Ah – those stories. Yes, well I didn’t copy them, I improved on them. Consider theirs as drafts that I rewrote.

CRAIG: Okay, let me just note that down for my book blurb. So why do you think it is that so many writers adapt your plays, but don’t go back to the origin stories, as it were.

WILL SHAKESPEARE: I think it shows just how brilliant my own work is. Though I do like your idea of combining the three different stories together. Tell me a bit about the plot.

CRAIG: Well, I tend to describe it like this – The Floating City is in turmoil. The magical seers who protect it are being killed by fearsome Djinn that rise out of the canals at night. Members of the city’s Council of Ten are being assassinated by masked fanatics. Refugee ships are arriving, bringing plague. Othmen spies are infiltrating everywhere. New power blocs are battling for control of the city. And the three Montecchi daughters – Giuliette, Disdemona and Isabella – are struggling with love and loss, and trying to write their own destinies. And amongst them all is the mysterious and deadly Shadow Master, who sees to be directing everyone like players in a game. But some things in this game may be beyond even his masterful control. – Uh, are you taking notes?

WILL SHAKESPEARE: No, no, just jotting down some points for a new work I’m creating.

CRAIG: What will it be about?

WILL SHAKESPEARE: I don’t like to talk too much about work in progress.

CRAIG: Just an outline then?

WILL SHAKESPEARE: No, no. I really don’t like to talk about it.

Craig: What will it be called then?

WILL SHAKESPEARE: I’m thinking of calling it, Much Ado about the City that Floats. 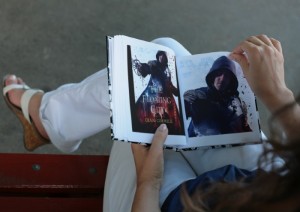 CRAIG: It wouldn’t be about three sisters in a Venice-like city that is besieged by fearful Turkish-like invaders would it?

WILL SHAKESPEARE: Well, I think that’s a bit of a simplification.

CRAIG: And it wouldn’t have analogies for Islamic fear mongering and the treatment of refugees in the modern world would it? – Uh – you’re taking notes again.

WILL SHAKESPEARE: Just another idea I’ve had.

CRAIG: You’re not ripping off my ideas are you?

WILL SHAKESPEARE: Ripping off? I don’t even know the term. My work is clearly a conflaburation.

WILL SHAKESPEARE: A conflaburation. A work that is so fantastical that no author can lay claim to owning it.

CRAIG: Did you just make that word up?

WILL SHAKESPEARE: Of course. If there isn’t a good word when you need one, then you make one up. Like worsted-stocking knave. That’s one of my favourites. Or amazement, assassination, castigate, countless, submerge, dwindle, frugal, impartial, majestic, pious, suspicious and critic. They are all mine. And you don’t hear me whining about breaches of copyright when people use them do you?

WILL SHAKESPEARE: What about phrases then. Do any of these sound familiar? Wyrd Sisters, Time Out of Joint, Infinite Jest, The Dogs of War, The Gods Themselves, The Way to a Dusty Death, Something Wicked This Way Comes, The Sound and the Fury, The Seeds of Time, Brave New World, In Cold Blood, Fools of Fortune, The Darling Buds of May, Remembrance of Things Past. – They were all mine, and people ripped them off for their book titles!

CRAIG: You’ve been collecting those and saving them up for a moment like this, haven’t you?

WILL SHAKESPEARE: What makes you say that?

CRAIG: Let’s call it a Conflaburation. Well any last comments, as we are time’s subjects, and time bids be gone.

WILL SHAKESPEARE: Hang on, that’s one of mine, isn’t it? You can’t use that without my permission.

CRAIG: Don’t worry. I adapted it from an Italian folk saying. And anyway, I can no other answer make, but, thanks, and thanks.

WILL SHAKESPEARE: Oh, yes, of course. Thank you for your interest. – Wait on! That’s was one of mine too! Come back here you worsted-stocking knave!
+ + +

Craig Cormick is an Australian author of fiction and non-fiction. The Floating City and the Shadow Master are published by Angry Robot Books. You can find more about Craig at www.craigcormick.com 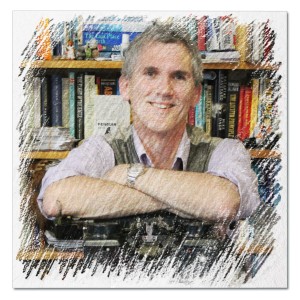