Lessons Learned and Applied
The Parallels Between Singing and Writing

I used to be a folk singer. No–correction–I am a folk singer, I just don’t do it as a full-time job any more, but even though I’ve officially retired from the road the singing is in me and I don’t think I’ll ever get it out. I don’t even want to. People ask if I miss it. No, I don’t. I don’t miss it because in my head I haven’t really stopped. I’m just on an extended break between tours. As it turns out, that’s almost true, as in April 2015, Artisan takes to the road for a series of reunion gigs, the first in five years.

What do I do now? Well, I haven’t actually retired, that’s for sure. I run a booking agency for other folk performers touring in the UK, and I write science fiction and fantasy. My first novel, Empire of Dust, is a twisty space opera featuring brain-implanted psi-techs. 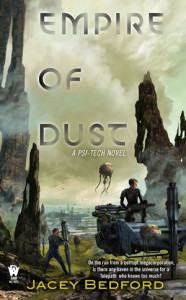 I’ve always written. I started my first novel when I was fifteen–a post apocalyptic dystopia (eat your heart out, Hunger Games fans) peopled by a cast of characters lifted from my favourite bands. I wrote it long-hand (the first five chapters, anyway, which was as far as I got) and typed it out (slowly and painfully) on a borrowed Imperial 66. I wrote through my twenties, when I was a librarian. When my kids came along I wrote while they slept. (Hence my habit of writing way into the early hours of the morning, which I’ve never been able to break.) And I wrote whilst singing my head off, in harmony–or at least in the back of the van on the way to gigs.

Music opened up the world for me. I come from a tiny village on the edge of the Yorkshire Pennines. Stick a pin in the middle of the island that is England, Scotland and Wales and I’ll be the one to yell, Ouch!. But as Artisan’s popularity grew, we began to tour the USA and Canada, meet new people and make new friends. I got my first writing break through music, via the hugely talented, Nebula Award-winning writer, Elizabeth Ann Scarborough, a friend of a group of (musical) friends from Seattle and–as it turns out–an Artisan fan. I would never have asked her to read my work because even as a clueless newbie I knew how many times professional writers get asked for those kind of favours, but my friend mentioned that I wrote. Annie (bless her) offered. She passed on the message to send the first chapter of my novel because she figured if I was used to entertaining an audience, I probably had a bit of gumption when it came to writing too. That was the first time I’d actually compared notes between the two halves of my life, but what she said made a lot of sense. This is how I see it…

Feedback
When you write a book feedback is slow. From the first once-upon-a-time to the book being out there on bookstore shelves can take years. When you’re on a stage, feedback is instant. Your audience votes with applause and laughter, or if you really suck it votes with its feet. After the show it votes with its wallet at the CD sales stand. Obviously, if something works on stage you keep it in the act. If it doesn’t, you drop it. It may take a lot longer to incorporate feedback into your writing, so you have to try and think ahead and to a certain extent second-guess your audience. What will they take to their hearts and what won’t they? This is where being a member of a good critique group or attending an event like Milford really helps.

Style
I don’t write songs. It takes me a minimum of 120,000 words to explain what my husband, Brian Bedford, can write in four verses. He’s Artisan’s song writer. We want his lyrics to be heard. In transmitting that song to an audience it’s important that we, as singers, don’t stand in front of it. The audience should hear the song, feel it, not be drawn to an examination of singing technique or the clarity of any one voice. If we’re doing our job right, the technique should be invisible. We’re not saying, ‘Listen to me,’ we’re saying, ‘Listen to the song.’

Ditto with writing, especially genre writing. (If you write literary or experimental fiction, all bets are off.) Of course, there’s no One True Way, every writer is different, but this is my take on it. Purple prose, metaphor and alliteration will only take you so far. Just as the singer shouldn’t stand in front of the song, I don’t believe the author should stand in front of the story. I prefer the writing to be clean and elegant, the words apposite, the technique, invisible. Lyrical prose is a plus, as long as it doesn’t pop up and distract the reader. While you’re wondering why the author chose to describe a person’s looks as umbelliferous, you’re missing what’s going on. The reader should be able to immerse themselves in what’s happening on the page and not thinking about the person who wrote it and why they chose that particular word..

Plot
When you’re putting together a set of songs for a concert you need a beginning a middle and an end. You’re creating a sustainable entertainment arc. Your ‘wake-up’ starter-song should grab your audience’s attention and tell them, ‘This is what you can expect, so listen-up!’ The end should be a big finish to fulfil your promise and raise the roof. Between those two bookends you need a succession of carefully chosen contrasts, each one building on the last; tension and release. If you juxtapose a lively song with an emotional melodic one full of lush harmonies then both songs benefit from the comparison. If you follow a tense, dramatic song (often your mid-point in the set) with a clever little ditty, it gives the audience chance to breathe again, but without losing their attention. Between the songs, you chat to them–little stories to lead from one song to the next while setting the right mood. If they call for it, and they always do, you can give them an encore, something soft and warm to send them home smiling, blissed out

When writing it’s often a good plan to start just as things are kicking off, or in the middle of the action (in medias res), and vary the pace, building in an escalating series of events (reversals and pinch points) until you reach a dramatic mid-point, the fulcrum on which the lever of your story balances. A series of transitions holds it all together, just like your links between songs. Then you head for the no-holds-barred finale, probably via another big reversal and pinch point or plot twist. But don’t just stop there–follow it with a resolution. In other words, give them an encore to send them home happy.

Attention Span
All the time, whether singing or writing, you have to hold your audience’s attention. If you turn away and stop to tie your shoelace, literally or figuratively, you’ve lost them. You don’t need to keep up a frenetic pace from start to finish, of course, but you do need to keep up a level of interest, and there should be dramatic tension running through it all. They have to want to turn the page, listen to the next song.

Characters
Your onstage persona is–like the advert says–you, but on a good day. Slightly larger than life, witty, warm, human, humane. Your audience should like you. That’s what will keep them coming back. No matter how much they like your music, if you don’t get them on your side, turn them into friends, they’ll not become steadfast fans. Feeling miserable? Having a bad day? Don’t ever take it out on your audience.

Your reader has to care about your characters, too. They have to want them to succeed in their endeavour, find true love, marry Princess Buttercup, drop the ring into the fires of Mount Doom and return safely, or stick it to a totalitarian state. There’s nothing that will get a book hurled against a wall more quickly than if your characters are unremitting arseholes or dull at ditch-water. I don’t care what happens to these characters–the eight deadly words you never want to hear from your readers.

Reviews
Afterwards there are reviews. We all hope for good ones:

“Bedford builds a taut story around the dangers of a new world…. Readers who crave high adventure and tense plots will enjoy this voyage into the future.” – Publishers’ Weekly review of Empire of Dust.
“Artisan aren’t a hard act to follow. All I have to do now is get up here on stage and burst into flames.” –Valdy, Canada.
“For tight, exciting harmony singing, as well as sheer delight and entertainment, Artisan are the bee’s knees. You’d be mad to miss them.” –St Neot’s Festival.
Good reviews are great. Not so good reviews? Well, you learn from them as well, but though comments in a review may be a consideration when you start the next project, plan the next book, do the next gig, make the next CD, at the end of the day a review is just one person’s opinion. Read it (or don’t) and move on. Your writing and your music come from the heart. They are not just what you do, they are what you are. Trust yourself. 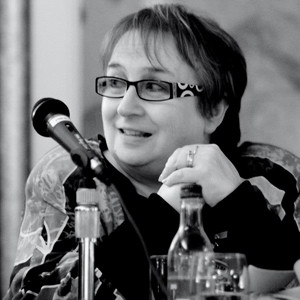 Jacey Bedford is a British author published by DAW in the USA. Her debut book, Empire of Dust, the first book in her Psi-tech Universe, launched in November 2014 and her second, Crossways, a sequel, is due in August 2015. She’s agented by Amy Boggs of the Donald Maass Literary Agency. You can find out more from her website, or her blog, Tales from the Typeface

In another life she sang with a cappella trio Artisan from 1985 to 2005, playing gigs and festivals all over the UK, Canada, the USA (thirty-one North American tours) parts of Europe, Australia and even (once, briefly) Hong Kong. Along with her song-mates, Hilary Spencer and Brian Bedford, she’s made twelve CDs and a DVD, done one reunion tour in 2010 and from April to October 2015 will hit the road again for a series of reunion gigs all over the UK, ten years after officially hanging up her tonsils. She keeps her connections to the music world by running a booking agency for other folk musicians.