Sometimes life tells us things we need to hear

The Beast, The Janna Mysteries and The Janna Chronicles – guest post by Felicity Pulman

I’ve long been fascinated by the Middle Ages and when a character popped into my head: a young woman, daughter of a wortwyf, whose mother dies in mysterious circumstances but who is unable to avenge her mother’s murder because of her own lowly circumstances, the temptation to write a series about Janna’s quest for justice was irresistible.

But I’m not a trained historian, just an amateur enthusiast, and so I contacted Gillian, who kindly supervised me through the six books that followed Janna’s search for her unknown father, through forest, farm, abbey and town and into the heart of the royal courts, solving crimes and mysteries along the way, including the mystery of her own birth and of her heart.

The series is set in the 1140s, at the time of the civil war (or Anarchy) between King Stephen and the Empress Matilda. Establishing the historical framework was easy enough through biographies and annals of the time. It made for a wonderful backdrop to Janna’s quest, being a time of treachery and betrayal where no-one could be trusted, not even those three men who would win Janna’s heart: the humble peasant, Godric; the handsome nobleman, Hugh; and the charismatic pilgrim, Ralph. What stumped me was how people actually lived during that time, from peasants toiling in the fields (and the rhythm of nature that dictated their toil) to living as a religious in an abbey, as a drab in a tavern, and as a courtier in the royal court. And that’s where ‘the Beast’ came in. As well as being able to access early drafts of this work, which told me everything from forms of address (tricky!) to crafts and clothing, music and art, eating and drinking, and everything in between, I was also able to consult the ‘guru’ herself, the medieval specialist and co-author of the final draft of the Beast, now published as The Middle Ages Unlocked, with its wealth of information on all those tricky minutiae not covered by ‘history books’.

Because Janna travelled in search of her father, so did I. Seeing the places she went to (eg Wilton, Sarum, Winchester, Stonehenge, Oxford) helped me envisage her situation and place her within a ‘real’ landscape, while sometimes also suggesting major plot points.

The series has had a chequered history. The first four Janna Mysteries were published by Random House Australia. When they declined to publish the last two, I had my first experience in self-publishing, with a firm called CreateSpace in the USA. I was determined to finish Janna’s quest in response not only to my own curiosity but also to satisfy the demands of the many fans who wrote to ask when the next book was coming out. The fact that I was receiving ‘fan mail’ from both teenagers (the original targeted audience) AND adults led me to think that perhaps I should rewrite the series with an adult audience in mind. To my delight Momentum Books (Pan Macmillan) took it on. Rewritten, repackaged and retitled, the books are now available as The Janna Chronicles in both e and p/b format. 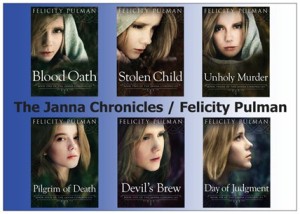 They are still receiving accolades – and I can rest easy knowing that I’ve been able to rely on expert advice for their historical context! I’m still writing about the Middle Ages and still consulting ‘the Beast’ in it’s far more user-friendly format: The Middle Ages Unlocked. It’s a wonderful resource for both readers, and writers, and highly recommended. 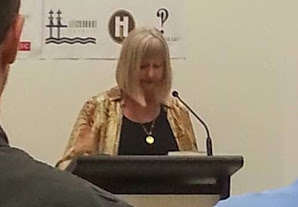