The Biology and Lifestyle of Griffins by K.J. Taylor

On Sunday, a group of us shared a booklaunch at a science fiction convention. One of the authors was K.J. Taylor. She and I share a Moomin addiction and are Tuckerising each other due to a random conversation on Facebook.

Her new novel, The Last Guard” is set in Cymria, a place where humans live alongside griffins. I word this with care, for I’m not at all certain what would happen if I implied the griffins were second in importance. To celebrate, she has kindly given us important information concerning griffins. For Sydneysiders who find this post in time, she will be at GleeBooks on 7 October. 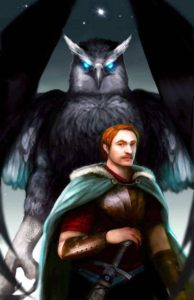 In the wild, griffins generally live in mountainous areas, and make their nests in various places – nesting mothers generally choose treetop platforms which they make themselves, but griffins have been known to choose caves and overhangs for sleeping and eating. If you are travelling in the wilds of Cymria and happen upon a cave with a stench of rotten meat about it, run away very fast – a wild griffin has no qualms about adding you to the menu.

Griffins hunt their prey both from the air and from the ground – sometimes swooping down on their victim from above, and at other times mounting an ambush from cover. More than one person has been killed that way, but most of the time they prefer larger animals such as deer, and livestock which they frequently steal.

Unfortunately, as humans became more and more numerous and their settlements became larger, the wild griffins began to lose their habitat. Prey became more difficult to find as wild animals were killed or driven away by human activities, and in time the griffins were forced to begin taking livestock rather than starve. Naturally the humans banded together and killed plenty of griffins to protect their flocks, and their numbers began to drop.

However, not being mere dumb animals, some griffins soon realised that there was another way to survive. They began to loiter around human settlements, picking up scraps, and over time some began to form bonds with various humans who took pity on the starving creatures, which they venerated as sacred (some humans had even argued against killing livestock-stealing griffins for this reason, but mostly went ignored. In the face of starvation, nothing is sacred).

So some humans began deliberately feeding the griffins, mostly out of basic decency and kindness. Others, happening upon griffin chicks that had been lost or abandoned, took them in and kept them as pets.

In time such griffins became more and more accustomed to humans, who in turn came to see that the creatures were at least as intelligent as themselves, and that the sounds they made were in fact a language. As humans and griffins grew closer, both races began to understand each others’ speech – chicks raised by humans understood them more or less perfectly, though they were unable to speak the human language themselves.

And, when fighting began to break out among the humans, the griffins joined in – fighting to defend the towns and villages which they had claimed as their “territories”. Before long it became obvious enough to both sides that if griffins fought alongside humans they could crush their enemies and seize more territory for themselves. And so the first true griffiners emerged. Griffins, recognising that wealthy and powerful humans could provide better food and shelter, began to gravitate toward the emerging nobility, and many of them would form a special bond with a particular human. Others made the choice purely out of self-interest. Some griffins feel genuine affection toward their humans, but others see their partners as nothing more than a commodity on legs and treat them accordingly.

Not wanting to leave “their” humans unprotected, partnered griffins took to carrying them on their backs when travelling, though aerial combat proved to be far too dangerous and inconvenient to be particularly worth it. Some griffiners would use bows while on griffinback, but flying hands-free was extremely risky. Besides which, carrying a rider makes a griffin slower and less agile in the air, so this idea never really got off the ground, so to speak.

Griffins are able to mate all year round, and without the need to consider the avilability of food they have more or less abandoned the “mating season”. When a female goes into heat males will fight for the right to mate with her, but mating still occurs even when the female is not on heat, if it is simply convenient at the time. Some females will couple with a male merely to win something from him, a trick plenty of humans have used themselves! Pregnancy lasts for three months, and after laying the eggs must be incubated for a further three months. A typical clutch consists of three eggs, about the size of watermelons, usually speckled brown in colour (though there was at least one exception in recorded history…).

After hatching the chicks stay in the nest, sharing their mother’s food, until they are large enough to leave. More or less the moment they are able to fly, the mother will drive them away. If they try to return to the nest, she will attack to kill.

City griffins generally live for fifty to seventy years of age, though some have lived much longer (it is commonly believed that more magically powerful griffins have longer lifespans). Much like other large predators, they spend a lot of their time sleeping. Griffins aren’t particularly talkative and have a limited range of emotions – they have little to no concept of love, and virtually no sense of empathy. They find both concepts largely incomprehensible, and view any sort of religious worship as complete nonsense, as they have no concept of spirituality and prefer to think of themselves as the centre of the universe. The existence of the gods would in other words bruise their ridiculously huge egos and is therefore unacceptable.

Griffins are however quite capable of showing affection, and when scratched or otherwise petted they will sometimes purr or croon. The chicks are very playful, though playing with one will probably leave you sporting a lot of scratches.

Children are generally not allowed to be presented to the griffins as potential griffiners, on the grounds that it’s simply too dangerous. Griffins partnered with children can and have killed their humans, purely by accident.

As for the wild griffins, they are now largely extinct and have no rights. Some are killed outright, and others captured and forced to entertain the crowds at the fighting pits which most Cymrian cities have. Few survive for long, and all are intentionally crippled from using their magic with regular doses of a herb known as griffinsbane, which paralyses the organ responsible for generating magic. Wild griffins are thought of as savage brutes incapable of speech, and it would take a truly exceptional person to ever successfully form a partnership with one. But every now and then, such a person does come along…