My first guest this year is the wonderful Wendy Orr. And the theme this year… well, I’ll let her explain it herself.

In 1991, I broke my neck in a car accident. Actually, the driver who went through a Give Way sign at 140 km could be said to have broken it for me, but however you word it, I was the one with fractured and displaced neck vertebrae, whiplash, fractured skull, two broken ankles, smashed heel, smashed thumb, concussion and inner ear damage causing severe balance problems. The other injuries were minor and I don’t want to bore you.
Over the next few years, every specialist visit brought more discouraging news: I should never cross a street on my own, would never be able to walk on rough ground, go for a walk for pleasure, wear high heels, go on a boat…
Needless to say, I’ve looked at this story in many ways, including fiction. But this is Women’s History Month, so maybe it’s time to examine it from a feminist perspective.
At the time, I was a mother of two, farmer’s wife, occupational therapist and part-time writer: two children’s books published and several more contracted. Thank god for being a writer, you might say, as one insurance officer did, explaining that I wouldn’t need compensation for loss of income, since the accident had given me more time to write. After all, there’s nothing to writing except for having the time to do it, is there? Especially children’s books.
My rehab officer had earlier explained that as I was already thirty-seven, rehabilitation wouldn’t be worthwhile, especially as it was clear that I was over 50% disabled and would therefore be entitled to compensation. This wasn’t quite as devastating as you might think, because I was still completely convinced that I’d make a full recovery and be back at work in three months.
However, after two years it became clear that I couldn’t go on indefinitely postponing my return to work and would have to resign. It was a loss of job, income, and a huge part of my identity. I arranged that the friend who drove me to town to clear out my office would take me straight on to see a psychologist.
In a cliché to absolutely avoid in fiction, ‘One door closes and another opens,’ the receptionist greeted me with, ‘Your husband’s left a message: something about a short list.’ Leaving it to You, which I’d finished the week before the accident, was on the CBCA shortlist.
Still, even shortlisted books rarely equal paid employment, so I went to our country town solicitor to ask about compensation. The problem was, he said, that since I was a married woman, I was unlikely to receive compensation for loss of earning. Not fair, but the way it was.
I don’t know if I’d be writing this story if it didn’t have a happy ending. All the advice I’ve mentioned, both medical and legal, was incorrect. I was entitled to both rehabilitation and financial compensation – and although it took twenty years, I’ve made a nearly complete physical recovery. Would I have had to fight for it all quite so hard if I’d been a man? I doubt it. Would a woman receive the same advice today? I sincerely hope not.
And of course, in the end, I did say thank god for writing. In typical cannibalistic writer fashion, I even used my accident as a basis for the YA novel Peeling the Onion. I will never see the experience as something to be grateful for, but there is nothing so terrible that it can’t be twisted into a story, and I will always be grateful for that. 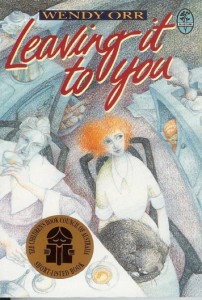 Wendy Orr is the internationally published and award-winning author of more than thirty books, ranging from picture books to adult. In 2008 Nim’s Island was released as a Hollywood feature film starring Jodie Foster, Abigail Breslin and Gerard Butler; Return to Nim’s Island, based on Nim at Sea and starring Bindi Irwin as Nim, followed in 2013. The third in the series, Rescue on Nim’s Island, was published in 2014 and is in development as a film. A Nim’s Island television series is also in development.